For the first time since we arrived, last night was an early night. Today, that is seen in the energy of all of us: field-work is demanding; processing what is learned through both interviews and observations, evening and day, can be exhausting. With notes to complete, not to mention video uploads misbehaving, the evenings can get late. We started the day talking, among other themes, tourism, its challenges and opportunities, with our host at Hostel Kimmell. Then, we visited the pollera maker Astevia B. Combe living and working next door. In a little while, we will attend the processions and serenade songs that will likely last until midnight. As the mass celebrating Santo Domingo is tomorrow morning, the serenades signify the awaiting of the arrival of the celebration of the patron saint. 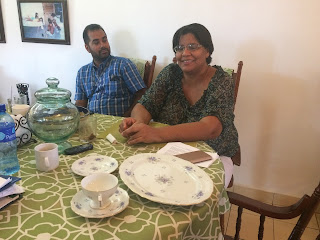 An interesting observation that we have discussed is the structure of several of the older couples we have spoken with, consist of a women with a past career as public school teacher who is also active in church organizations and/or sell handicraft. The husbands often have combined careers of agricultural labor and some service sector work, such as retail or similar, but not necessarily formal higher education. The men have 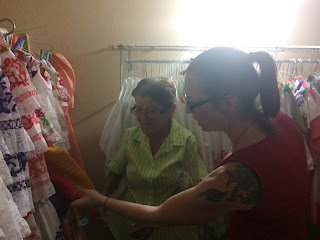 come across as strongly supportive of their wives' entrepreneurship. While our sample is tiny, we are hearing this is a common trend in older marriages in this region of Panama. Adding to what might be demographic and cultural shifts, Marino tell us that during his own university years in Panama City, men would outnumber women, but as a university teacher himself now, he notices significantly more women than men pursuing a college degree. This is something we will aim to find reliable demographic data on, for instance from a government website, for this region in particular and for Panama in general. 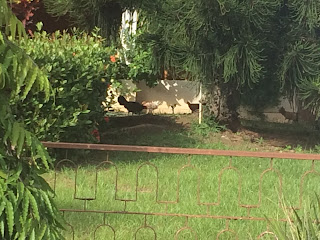 Another series I call "animals of Santo Domingo".

Chickens can be seen - and heard - throughout town Ethnographic work, especially the applied approaches such as our study, are often not done in isolation, but in a context of other data, historical and demographic knowledge. As a general consideration, there is a theoretical and methodological discussion as to when and how this external data is included in a study: before a study to establish a knowledge base and direct questions, or after initial data analysis to avoid bias in observations and to let the ethnographic data speak for itself initially and let further research questions arise from that ethnographic data that external data might then aid in answering. In our case, we would be interested in cultural attitudes and differences that might be associated with such demographic changes. 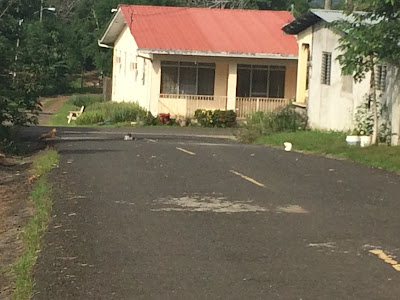 Second installment of "animals of Santo Domingo': lazy cats taking over the road

In other words, not the demographic changes per se., but in whether such changes have a relationship with cultural changes and differences we are observing.

And they lived happily everafter