Corpus Christi: The Mass and the Dances

Now we are getting to the central part of Corpus Christi: the mass, the dancers in the church, the procession of the host, and the dance performances. The Corpus Christi mass was last Thursday, and additional performances of dance and music took place from Friday to Sunday. It is not Friday morning in Panama City, for once it rains in the morning (it has normally been starting in the afternoon, and we are leaving for Parita and Chitre in half an hour to observe the parade this Saturday and hopefully get a couple of more interviews conducted. Since Saturday will likely be a day of many visitors, we also hope to distribute more surveys to gauge the visitor experience, something the city of Parita is very interested in and that we are working to be able to share with them. 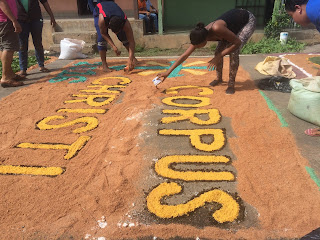 Local volunteers work on decorating the street for the Corpus Christi procession following mass. We saw mulch and salt in all colors used. When we arrived in Parita early Thursday morning, there was already a feeling of excitement and celebration. A couple of streets around the colonial square and church were blocked and being readied for the procession following mass. Fantastic artworks of decoration were being prepared using colored salt, colored mulch and other wood pieces, as well as plants and flowers. The result was absolutely stunning, and the amount of work being put into this was incredible. This observation combined with our conversations with the committee members, who put in large amounts of volunteer work to put the festival in place and the dancers who spend significant amount of time practicing, raises the question of resources, ability to participate, and what can be done to support a continuation of this tradition. 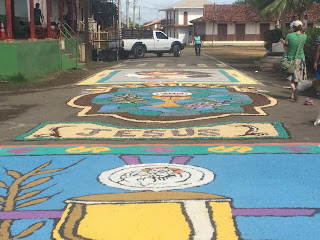 A small portion of the street decoration. Michelle is aiming to get the best shot of the artwork

Inside the church, we aimed for a seat close to the aisle to allow for the best viewing of the dancers as they entered the church. The church was beautifully decorated, something we had noticed as we visited the day before. Quite a few people were dressed formally, prepared to celebrate a central part of their faith. We had made sure to wear some more formal and festive clothing than else. During fieldwork in a tropical climate, clothing and hair tends to go the way of the comfortable and convenient (read, sweaty and slightly muddy) rather than the stylish. We saw and greeted several people we had already talked to.

The main entrance and side doors to the church remained open, allowing for at least some breeze to come through. Some fans kept the air circulating. The church was full and people were standing in the middle section. As so many times in Parita, I felt warm and sweaty while the locals looked well-dressed, well-groomed, clean, and with well-styled hair. It is beyond me how they do it. The mass began by the dancers entering. I will let the videos speak for themselves. It was a very moving experience and from our interviewees, we know that for both dancers and attendees, this is a deep spiritual moment with deep religious significance. Note that the devils mostly carry their masks backwards when they enter the church: we are told this is a symbol of the power of God being present: when entering holy ground, even the devils are impacted.

After mass, the devils and other dancers left the church. The priest proceeded to bring out the Host, the symbol of Jesus Christ's body and blood, and under a canopy, carried it through the central town followed by the parishioners and any visitors. They proceeded over the decorated street previously shown, and made their way around the colonial square, visiting the four corners of the world.

As you may be noticing, the devil dances are not the only ones present. Another important dance is the Montezuma dance, which we saw performed Thursday at the square after mass and procession, and again Saturday when several dances were performed at a stage set up at the square. Since many people have to work Thursday, Saturday is a more convenient day to share the tradition of the dances. I want to highlight the Montezuma dance, since the Spaniards used it to subjugate the indigenous people, conveying the message that resistance was futile. It reenacts an interpretation of the Spanish conquest of Mexico, where the Aztec emperor of the name Montezuma was captured and killed. If such a great king could be captured, how could anyone resist? At the end of the dance, Montezuma is captured and put in chains.

The Montezuma dance is also important as it has been brought up during our interviews as a dance that is difficult to get the youth interested in. There is extensive difficult dialogue to remember, so it requires much effort. Children and youth, we are told, tend to be drawn to the visually striking and somewhat easier Devil dances. One of our participants described how the Montezuma dance has an ambiguous emotional impact: it is deeply sad to watch this magnificent emperor and his empire be subjugated, but it also symbolizes Catholicism, the religion many Panamanians have been and are devoted to, being brought to Panama and Latin America in general. Even though I did not understand the Spanish words in the performance, I was deeply moved by the dance and felt the sadness as well as the hope implied in it.

And they lived happily everafter